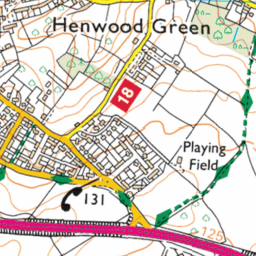 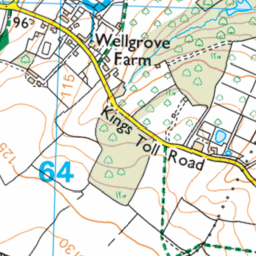 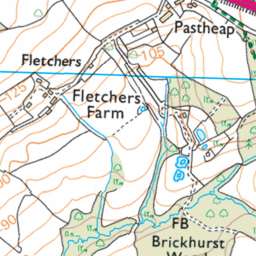 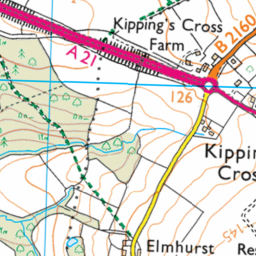 A21 junctions with Hastings Road poorly signed on northbound carriageway

There is inadequate signage here of the two turnings on the A21 northbound carriageway, both with separate sections of Hastings Road. The first junction on the northbound carriageway here is a left turn into Hastings Road with no slip roads to reduce/gain speed. There is one warning triangle and an (out of date) blue border direction sign displaying "Farm access" ~200m before the left turn. At the turning itself, there is an incredibly small flag sign telling drivers of the turn off, ~10m before the turn. This is not enough of a warning to drivers about the sudden change in speeds vehicles may be doing on the main carriageway, and in the past I have experienced close calls with drivers not realising the speed of a vehicle turning/pulling out. Secondly, the right turn across the central reservation into Hastings Road is just as inadequately signed. Although this turn is advertised to local residents to reduce traffic making this dangerous turn, there is little warning to other drivers that cars may be slowing down or perhaps even changing lanes abruptly. It is also worth noting that this turning is necessary to stay on the route of the High Weald Country Tour, which is signed at various points on the A21 from Forstal Farm Roundabout. The only mention of the junction before the turn itself is 150m before the lane diverge, and is a medium sized direction sign (incorrectly in black and white). There is a flag sign a the turn itself also. I would suggest to fix these issues more signage is needed, including staggered junction warning signs some way before the first turn, accompanied by a map type sign advising of both turnings (more importantly that the left turn has no slip road).